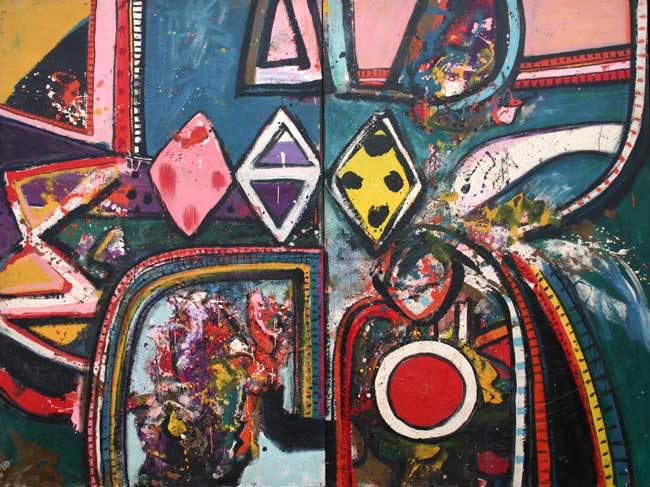 The Royal Academy of Arts has just announced that Alan Davie RA has been elected a Senior Royal Academician.

Born in Grangemouth in 1920, Alan Davie studied painting at Edinburgh College of Art, 1938 – 40. After a period spent serving in the army he worked as a jazz musician, while developing his interests in writing poetry, designing and making textiles, ceramic and jewellery.
Between 1947 – 49 Alan and his wife Bili travelled through France to Italy and Spain, by which point his work was considered ground-breaking, with successful exhibitions held in Florence and Venice. During this period the collector Peggy Guggenheim became a major supporter introducing him to artists and galleries in the U.K. and in the U.S.A.

From the late 1940’s Davie increasingly freed himself from the conventions of picture making, liberated by subconscious ideas inspired by surrealism, and the value of intuition and spontaneity.

His first London exhibition was held at Gimpel Fils in 1950. In 1957 his work was shown at the Museum of Modern Art, Paris and at the Guggenheim in New York, during which time he met Jackson Pollock, Franz Kline, Willem de Kooning, Robert Motherwell and Mark Rothko.
Alan Davie was invited to become the University of Leeds’s third Gregory Fellow in Painting in 1957. These Fellowships, funded by printer and philanthropist Eric Gregory, enabled artists, sculptors, poets and musicians to develop their skills at Leeds and serve as an inspiration to those around them. The scheme has recently been revived as the University’s Academy of Cultural Fellows; the first recipients of this funding are award-winning composer Cheryl Frances-Hoad and acclaimed stage designer Becs Andrews.

For more than 65 years Alan Davie has exhibited internationally and his work is held in many of the worlds major public collections. In 1972 he was awarded C.B.E. Today, he works from his home and studio near London where he continues to compose music, paint and draw.
This exhibition includes a small group of drawings made by Bili Davie during their travels to Europe in the late 1940’s. The delicate pencil and ink drawings form a record of their everyday domestic lives; views from a hotel room window, washing drying, kitchen tables being prepared for dinner. These beautiful sketches have been created on odd scraps of paper, at a time when artists materials would have been in short supply; and in their own way capture something of a very poignant moment in Europe’s history; a sense of youthful optimism and hope.
A connection to both Alan and Bili’s early drawings can be seen in a series of figurative drawings produced recently by Davie during a brief hospital visit. Unlike his studio work these drawings return to a more figurative tradition, blending a mixture of symbols and creatures with a representational depiction of his room, bed, vases of flowers, and views from the window.