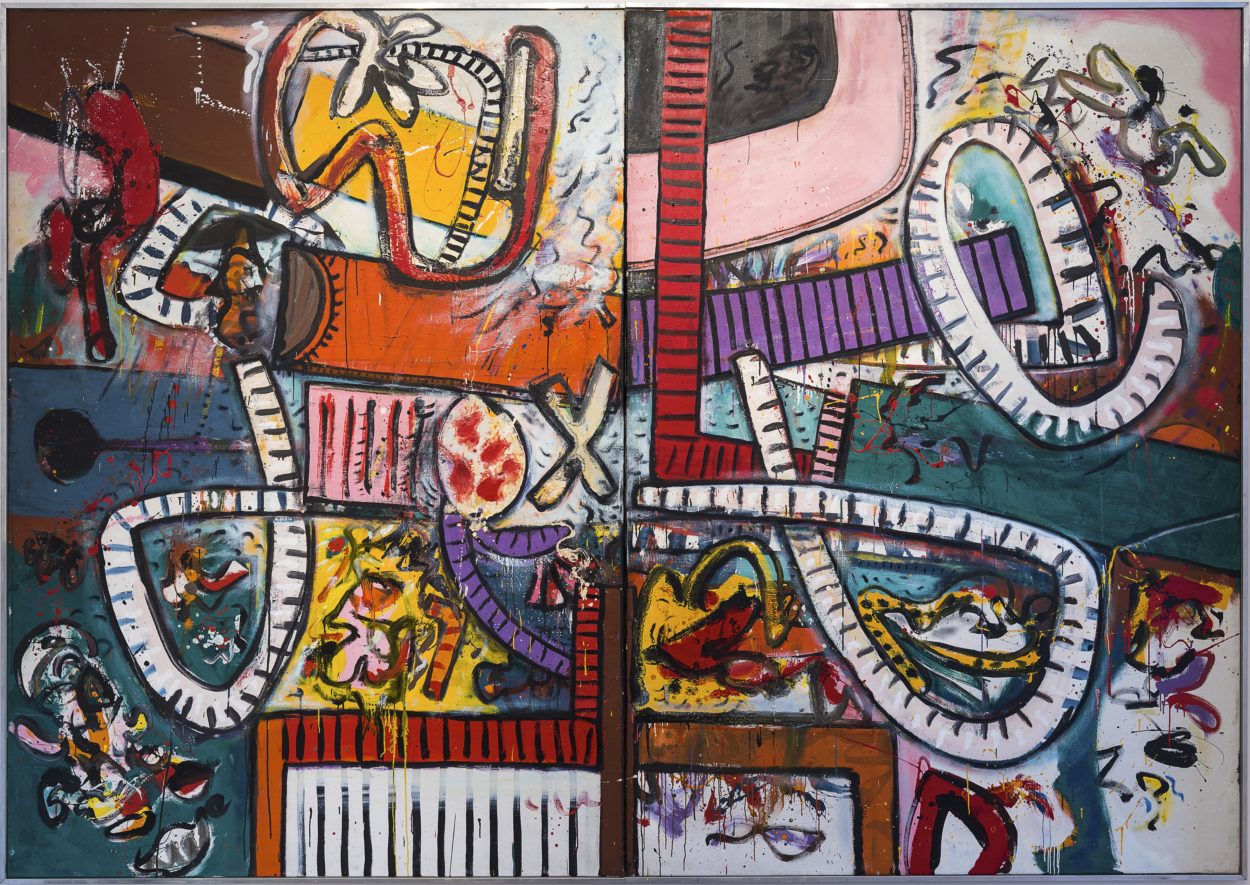 An exhibition of paintings and works on paper covering the period from 1948 – 2012. This extensive exhibition of 40 pictures will include rare and previously unseen works, providing an insight into the development of this ground breaking and highly influential international artist.

For six decades Alan Davie has been celebrated as being a central figure in the exploration and development of Abstract Expressionism in Britain. In his early years he was a poet, jewellery maker and jazz musician; interests and influences that stayed with him throughout his career.

In 1948 a scholarship from Edinburgh College of Art allowed Alan and his wife Bili, to travel throughout Europe. In Venice his visit coincided with the 1948 Biennale, and through an encounter with Peggy Guggenheim he was invited to America and introduced to the leading American abstract expressionists, who responded well to his work.

From 1950 he began to exhibit regularly at Gimpel Fils in London and his first exhibition at Catherine Viviano Gallery in New York, 1956, was a great success, with paintings purchased by several major public galleries and institutions, including the Metropolitan Museum of Art. In the UK during the 1960’s his work began to gain both critical and commercial success, encompassing his widespread interests in music, celtic and other ancient symbolism, Zen Buddhism, flying, sailing, and scuba diving. All these thing he considered as bringing him closer to nature, the raw life force expressed through his highly expressive, spontaneous paintings of the time.

Towards the end of the 1960s Davie began to spend the winter months in St Lucia where he increasingly tapped into ancient non – western cultures, his paintings becoming more formalised with an increasing use of internationally linked symbols and patterns. His interests continued to expand with a fascination of early Carib petroglyphs, Aboriginal, Asian and African art.

Davie’s interest in a common, universal perception and expression of nature and spirituality continued through his work until the last few weeks of his life; producing a constant stream of beautiful drawings and small paintings.

“I never really mixed with other artists, but I met some of my contemporaries when I came over to New York for my first show – people like Willem de Kooning, Yves Klein and Pollock came to the opening. My main interest is primitive art. I have a big collection of African and Oceanic things all round my house – they sit very nicely next to my paintings.”
Interview by Louise Cohen, Tate Gallery, 2009

The Work of Art seems to be something thrown off – a by-product
of the process of being and working. Art just happens….
Notes by the Artist (1958)

I don’t practice painting as an Art but as a means to enlightenment.
Towards a Philosophy of Creativity (1997)

“At Edinburgh College of Art I learned to hate Art” (1963)
“The real purpose of art teaching for me is the liberation of the human spirit – not the production of artists” (1997).

This destructive, yet at the same time liberating attitude, was also directed at the contemporary post war art scene in London where he found “that which I am seeking is not here…what a mass of ugly rubbish is on show here under the name of Art” (1948).